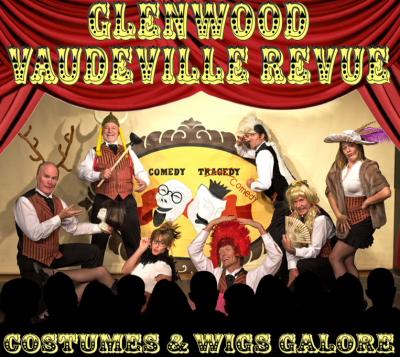 Glenwood’s favorite family dinner theater, the Glenwood Vaudeville Revue, has upgraded to some fancy new digs!  Guests will now find the theater conveniently located right downtown on Grand Avenue (which is just a short 15 minute walk from the Best Western Antlers).  And that’s not all!  With the move comes renovations and upgrades, 250,000 of them.  The former Springs Theater got a $250,000 remodel to house the new family comedy act.

One of the show highlights is a 20th century Wurlitzer photoplayer piano, one of perhaps only 100 still in existence.  Photo players were used historically to accompany the first moving pictures which were essentially a series of still photos.  When the “stops” on the piano are pulled, air travels through the pipes to create a variation of sounds such as flute, cello, bass, train whistle, cymbal crashes, etc.  The new-old piano is a major part of the pre-show shenanigans.

The remodel also includes a brand new kitchen and bar where the old movie concessions were located and a state-of-the-art theatrical lighting system.  The theater layout is similar to the old with more space, greater visibility and a seating capacity remaining at about 150.

If you haven’t been to the Glenwood Vaudeville Revue, it’s a great time to go check it out.  If you have been, go again for a whole new experience!  They’ll be “pulling out all the stops” as the saying goes!